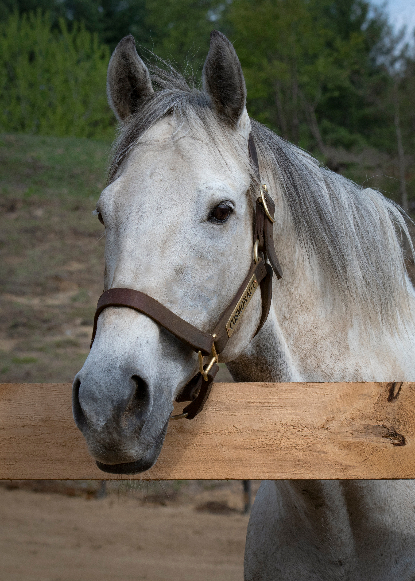 Multiple graded stakes winner and pensioned New York stallion Cosmonaut was humanely euthanized October 29 at Cornell Equine Hospital due to complications from surgery. The gray son of Lemon Drop Kid was 19.
Retired from stud to Old Friends at Cabin Creek in May of 2018, Cosmonaut was a hard- trying turf specialist, winning or finishing on the board in nine graded stakes races over five seasons of racing.
Bred in Kentucky by Patricia Pavlish, Cosmonaut was purchased as a yearling by trainer Carlos Martin for Flying Zee Stable. He broke his maiden at Saratoga in his 3-year-old season before finishing second in the Commonwealth Turf Stakes at Churchill Downs later that year. Shipping west to the barn of Patrick Biancone the next year, he earned a pair of Grade 3 victories in the Golden Gate Fields Handicap in California and the Arlington Handicap at Arlington Race Course.
Cosmonaut’s marquee season of racing came at 5, scoring another victory in the Arlington Handicap before finishing second by a neck to Purim in the Grade 1 Shadwell Turf Mile at Keeneland.
His effort in the Shadwell earned him a chance at the Breeders’ Cup Mile at Monmouth Park, where he finished third behind Kip Deville and Excellent Art after setting the pace over the soft going. After a second in the Grade 3 River City Handicap at Churchill Downs with Carlos Martin, he was transferred to the barn of Phil Serpe, where he remained until the end of his racing career.
Under the care of Serpe, Cosmonaut earned victories in the Grade 3 Fort Marcy Handicap at Belmont Park and the Tampa Bay Stakes at Tampa Bay Downs, as well as placings in two more Arlington Handicaps. He retired in 2009 after a fourth in the Grade 2 Fourstardave Handicap at Saratoga Race Course, wrapping up his career with eight wins and 11 other in-the-money finishes from 36 starts and $1,397,723 in earnings.
Entering stud in 2010 at Lynwood and Suzie O’Cain’s Highcliff Farm, Cosmonaut was a useful sire in New York and also stood at Mill Creek Farm, Saratoga Stud, and Keane Stud throughout his breeding career.
From seven crops of foals, he sired 45 winners with total progeny earnings of over $4 million. His top runners include Grade 3 Bourbonette Oaks winner Wonderment, Grade 2 placed Selenite and Marvin’s Miracle, and stakes winners Kreesie and Goodbye Brockley.
“Cosmonaut was a wonderful ole guy and loved his peaceful life being an ambassador for aftercare, but mainly loved his alfalfa,” Old Friends at Cabin Creek owner and manager JoAnn Pepper said in a tweet October 29. “We miss him so much already. They never get to
stay long enough.”